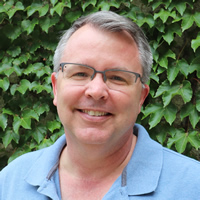 IRP is pleased to announce that Researcher Steven Cook has received the Chancellor’s Award for Excellence in Research: Critical Research Support.

For more than two decades, Steve has played a critical role in IRP’s mission to train the next generation of poverty scholars and to disseminate meticulously researched work on the many aspects of poverty to policymakers, service providers, fellow academics, and the general public.

Hilary M. Shager, Ph.D., Associate Director of Programs & Management for IRP, described his contributions in the nomination. “Steve’s skills and dedication bring incredible value to the university and its pursuit of the Wisconsin Idea. He is driven both by his commitment to excellence and his compassion for improving people’s lives.”

As IRP’s data sharing coordinator, Steve’s expertise is especially apparent in the success of the Wisconsin Administrative Data Core (WADC), which integrates data from many state agencies and is considered one of the richest resources of its kind in the country. Steve has collaborated to develop and continually grow this collection—to date, it has supported more than $80M in extramural research funding.

Former IRP Director Lawrence Berger highlighted the importance of Steve’s work on WADC. “Steve has played a driving leadership and administrative role in WADC’s success—facilitating IRP’s crucial relationships with State of Wisconsin agencies, overseeing technical aspects of the linkage and harmonization process, and advising on the design of WADC research projects. In these roles, Steve has established an exceptional reputation among both campus researchers and state agency leadership, which have extensively benefitted campus, both reputationally and financially.”

Steve began working with IRP faculty as a student research assistant and research intern in the 1990s, was hired as an Associate Researcher in 2003, and has held his current position as a Researcher since 2009.

When asked about his reaction to winning the award, Steve said, “I’m extremely honored to receive this recognition from the University.  It’s very rewarding to know that my colleagues at IRP value my contributions to our joint effort to better understand and improve the lives of underprivileged families.”

Chancellor Rebecca Blank will host the official awards ceremony virtually on April 26, 2021. Recipients receive a commemorative memento as well as a monetary award.