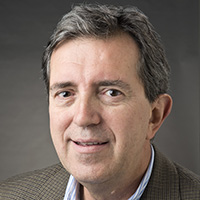 Timothy M. (Tim) Smeeding is the Lee Rainwater Distinguished Professor of Public Affairs and Economics at the La Follette School of Public Affairs at the University of Wisconsin–Madison. He was the founding director of the Luxembourg Income Study from 1983–2006 and was director of the Institute for Research on Poverty at UW–Madison from 2008–2014. He is the 2017 John Kenneth Galbraith Fellow of the American Academy of Political and Social Science. He was also a member of the National Academy of Sciences committee to build an agenda to reduce the number of children in poverty by half, and a co-author of the report, “A Roadmap to Reducing Child Poverty” which was released on February 28th, 2019. He has also been a visiting scholar at the Center for the Advance Study in Behavioral Sciences and the Russell Sage Foundation.

Tim is a multi-disciplinary scholar with articles that have appeared in the top journals in economics, sociology, political science, policy analysis, demography, social and applied statistics, health care, education and science more generally. His recent work has been on inequality in income wealth and consumption for the same individuals, social and economic mobility across generations, inequality of income, consumption and wealth, a child allowance for the United States, and poverty, especially for children, in national and cross-national contexts.