Poverty is measured in the United States by comparing a person’s or family’s income to a set poverty threshold or minimum amount of income needed to cover basic needs. People whose income falls under their threshold are considered poor.

The U.S. Census Bureau is the government agency in charge of measuring poverty. To do so, it uses two main measures, the official poverty measure and the Supplemental Poverty Measure, both of which are described in this FAQ.

The Census Bureau determines poverty status by using an official poverty measure (OPM) that compares pre-tax cash income against a threshold that is set at three times the cost of a minimum food diet in 1963 and adjusted for family size.

The OPM uses calculations of these three elements—income, threshold, and family—to estimate what percentage of the population is poor.

The official poverty estimates are drawn from the Current Population Survey Annual Social and Economic Supplement (CPS ASEC), which is conducted in February, March, and April with a sample of approximately 100,000 addresses per year.

In 2016, the most recent year for which data are available, the OPM national poverty rate was 12.7 percent. There were 40.6 million people in poverty.

The Census Bureau introduced the Supplemental Poverty Measure or SPM in 2010 to provide an alternative view of poverty in the United States that better reflects life in the 21st century, including contemporary social and economic realities and government policy.

As its name suggests, the SPM supplements but does not replace the official poverty measure, which remains the nation’s source for official poverty statistics and for determining means-tested program eligibility.

In a side-by-side comparison of the official poverty measure and the SPM, the Census Bureau notes their differences in measurement units, poverty threshold, threshold adjustments (e.g., by family size), updating thresholds, and what counts as resources, summarized in Table 3 below.

Note: “Family” as defined by the Census Bureau is “a group of two people or more (one of whom is the householder) related by birth, marriage, or adoption and residing together; all such people (including related subfamily members) are considered as members of one family.”

A comparison of official and SPM poverty rates in 2016 for the total population and among three age groups: under age 18, adults ages 18 to 64, and elders age 65 and over, is shown in Figure 2.

The much higher SPM poverty rates for people age 65 and older—14.5 percent vs. 9.3 percent using the OPM—partially reflect that the official thresholds are set lower for families with householders in this age group, while the SPM thresholds do not vary by age.

In addition, the SPM rate is higher for people age 65 and older because it includes out-of-pocket medical expenditures, which are typically high for the elderly, whereas the official measure does not take them into account. 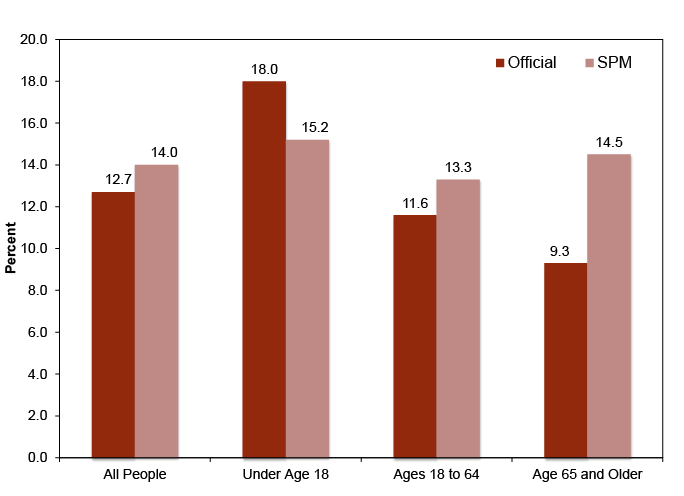